A History Fan’s Visit To Merida 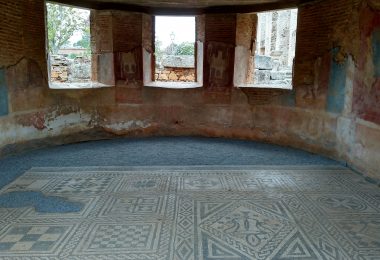 One of the things I wanted to see in Spain was Roman ruins. Mérida has more preserved Roman monuments than any other city in Spain. Perfect!

I got to Mérida by train. The train from Madrid to Badajoz has a stop in Mérida. It’s about a 5 hour train trip from Madrid to Mérida. Rolling into the Mérida train station is a real treat — the train goes right between sections of an aqueduct as it slows down for the station.

The Roman empire was known to pay its soldiers by granting them some of the land they helped conquer. In this case, a town named Emerita Augusta was founded (how’s that for a literal-minded naming process?) The modern name, “Mérida” is the linguistic descendent of “Emerita Augustus”.

Granting the veterans this land wasn’t just good for the vets; it helped Rome by putting a bunch of experienced soldiers right at an important river crossing, and giving them a personal stake in making sure the place remained under Roman control.

As Romans tend to do, they built stuff here. Lots of stuff. They built a bridge that was most of a kilometer long (currently the longest existing Roman bridge), set up a theater / coliseum / palace complex that is an archaeologist’s dream (people are still putting on plays at the theater, and it has been fixed up to give an idea of what it once looked like.) There is a circus (race track) outside town, with ruins of the stable / chariot storage nearby. All around this town there are little treats to see, like the foundations of housing, or a collection of Roman grave markers.

All this is very walkable. Many sites have no admission, as they are part of the city now (like the Roman bridge, which the locals use to walk across the river.) You can get a “complete circuit” ticket to see the paid attractions. I think it was about 10 euros. They hand you a map and let you take as many days as you like to see the sights.

I was very enthusiastic, so I saw all the attractions on the ticket in one day. After that, there was another full day of historical sites spread around town to see.

Romans are Only Part of the Story

Emerita Augusta was established in 25 BC. As the Roman Empire collapsed, the Visigoths came along. They built a hospital, where monks would care for any ailing travelers. Later the Umayyads took the area, and added their own layer of defensive works to Mérida.

I had many striking experiences in Mérida, but one that really stuck with me was a particular tower. There is a fortress at one end of the Roman bridge known as “the Alcazar.” That is just the Arabic word for palace / castle filtered through a couple other languages, so there are a number of buildings in Spain called “the Alcazar”. There is one in Toledo, for example.

Inside the Alcazar at Mérida, there is a tower. The entrance looks like this:

The carved pillars framing the entry were looted from the Visigoth hospital at the edge of town, and dragged over here to build the tower. Similar pillars can be seen inside the tower, used as supports around and over doors.

Inside the tower, a stair descends into a subterranean room with cool air and an enigmatic cistern.

Water collects here, seeping in from the river. This is right at the foot of a Roman dike, atop which later rulers built up high walls.

What strikes me about this tower is, though it was built by one culture, the parts of the tower are the legacy of the cultures that came before. Roman stones used to build the walls, Visigothic pillars used for decoration and structure, and overhead a mosque for the Umayyad soldiers. The Roman masons who carved the stones had no idea the stones would be used like this. The Visigothic artisans probably thought those pillars would remain in the hospital forever. But here they are. Being admired by a man who flew through the sky to visit the place.

Merida has the most patient drivers anywhere I’ve been. They will stop and wait for anyone who looks like they might be thinking of crossing the street. I caused problems there by stopping at crosswalks and waiting for a break in traffic. Every time, the drivers all stopped and waited for me to cross. I eventually learned to cross without hesitation as long as I was reasonably sure the driver saw me. They always stopped.

The driving culture was different in Barcelona. In Barcelona, the horn is probably the first part of the car to wear out. I wonder if Barcelonans know how to get around without a horn. Maybe they call a tow truck if the horn stops working.

Facial expression and eye contact are a little different in Merida than back home in southern California. In California, a nod or a smile is customary when two people cross paths. The only exception is busy areas, where the nodding and smiling would be constant. In Merida, I noticed no one was returning the gesture. And a lot of people seemed to be staring at me.

Eventually I figured out the staring was because I was being weird (with all the nodding and smiling.) So I learned that in Merida, one A) does not smile and B) random eye contact is okay. Folks staring at you doesn’t mean anything; it’s not aggression or an attempt to communicate. It’s just looking at you.

I felt very comfortable with the folks in Merida. There was a relaxed quality to them. I just needed to stop all my nodding, grinning, and traffic-stopping to realize it.

Plenty of people have written lists of things to do in Mérida. Google will reveal those to you. For a more general writeup, Wikipedia’s article is a good starting point.

One thought on “A History Fan’s Visit To Merida”