A History Fan’s Visit to Spain 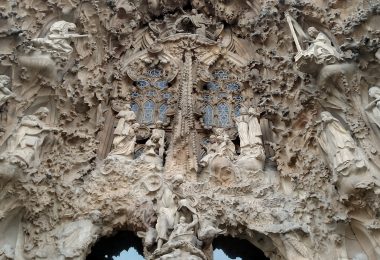 I recently had the great fortune to find myself in Spain with a week of time to myself. Being a history fan, I took the opportunity to visit some historical sites, and see buildings that are ten times older than any buildings near my home in the USA.

The Iberian peninsula — the area now dominated by Spain — has a rich history, and so many historical sites that it would take a lot longer than a week to see them all, and a lot longer still to truly comprehend their stories. I wanted to absorb all of it, but history is big like an ocean; you can swim in its waters, but you can never drink it all.

I’ve written about my visits to Toledo and Mérida. In this blog entry, I am leaving some general travelling notes in the hope they are useful to other visitors to Spain.

Once I knew I was going to Spain, I started to look into what I would most like to see. That was a hard decision. I quickly learned that Spain is a big square (more or less) and most points of interest are along the edges (plus some right in the middle around Madrid.) So unless I had the time to do a lap of the entire country (I did not) I needed to compromise.

If you are using public transit, you’ll be taking either trains or planes to get around Spain. I went with trains, to see the countryside. Later I learned that planes may have cost less as well as been faster. But I did enjoy the trains.

Spain has nice high-speed trains, so going across Spain takes less than a day (if you start early.) Train tickets can be purchased ahead of time online, but I walked into the train station and got my tickets same day. That meant walking up to the ticket counter in most towns. Madrid had ticket machines (which conveniently had English as a language option.)

In the 3 train journeys I made (on a total of 6 trains) I was able to get a ticket on my desired train same-day. But on the journey from Mérida to Barcelona, I’m lucky I bought the ticket for both legs of the trip in Mérida. If I had waited till Madrid, I would have had to pay double (all the cheap seats were taken by the time I got to Madrid.) Plus it’s cheaper to buy both legs of the trip at once.

Madrid — the capital of Spain — is right in the center of the country. The train tracks converge there. So there’s a good chance that traveling between any two cities will involve a train to Madrid, and another train from Madrid to your final destination.

The Madrid train station is big. There are three different areas that long distance trains might leave from: lower, middle, and upper. The middle and upper areas are easy; they have a security checkpoint (metal detector and baggage scanner) and feel like airline terminals. They have nice clear signs with train numbers and expected departure times hours in advance. The platform number for each train shows up as departure time draws near.

The lower terminal is different. It’s mostly used for commuter trains. My train to Mérida left from that area, even though it was a 5-hour trip into the countryside. The only sign I found indicating which train went to which platform only showed that info a few minutes in advance (barely long enough to run to a platform.) I was very lucky to find some helpful bystanders (“Look for the train labelled ‘Badajoz’, because it won’t say ‘Mérida‘”) and an angelic station employee who pointed me to the right platform once the train showed up.

If you’re going through Madrid, leave an hour to get your tickets, find your platform, and go through security. It’s hard to find English-speakers there, so if your Spanish skills are limited, allow a couple hours.

This trip was my first experiment with Air BnB. It was a good experience. I was able to get private apartments or rooms with just 2-3 days notice. It only cost me $30 – $50 per night. The lodgings were pleasant, and the hosts quite helpful. Two of the three hosts I worked with communicated well in written English via email and SMS. One host used the opportunity to practice his spoken English with me, and the other two preferred to speak Spanish. I would absolutely work with this service (and these hosts!) again.

Barcelona is a pleasant city to walk in. It is a big city, though, so if you use some public transit, you will have more time for destinations. It has busses (slow way to get around) and subways (fast!) Tickets for both are available from machines (with English!) in the subway stations. Both the subway and train tickets are available in 10-ticket books. There’s a significant per-ride discount on those books, and the books aren’t specific to a person; you can take a 5-person group on two trips with one of those books.

Getting to and from the airport is easy with Aerobus. Multiple Aerobus busses per hour run between the airport and Plaça de Catalunya (a big plaza downtown.) The trip takes around half an hour. You can get tickets from machines at the airport or in the Plaça de Catalunya. There are stops in between, but I did not see tickets available there.

My Spanish is poor. I learned some when I was a kid, but have not used it regularly since then. That would have kept me from picking Spain as a tourism destination, but my company was flying me to Spain, and I decided to take advantage of that paid plane ticket, language barrier be darned.

In the touristy areas of Barcelona, language wasn’t much of a problem. Folks who make a living off tourism in that city often had some English.

However, my weak Spanish became a problem as soon as I tried to leave Barcelona, at the train station. From that point on, I bought all my train tickets using Spanish, and once I was out of Barcelona, 90% of my conversations were in Spanish (the rest of my conversations were evenly divided between pantomime and English.) Though I was often dealing with people in the tourist industry, most of their customers were from other parts of Spain.

I learned there are two common reactions when I ask a Spaniard if they speak English (in Spanish, of course.) Some people give a blank stare or shake their heads decisively. That means “no”. Other people look uncomfortable. That means “yes, but I haven’t used it regularly since I was a kid.” In that case, it’s best to proceed in Spanish, and fall back on English only if absolutely necessary.

Funny story: during one of my three passes through Madrid, I asked an innocent bystander if he spoke English. He gave me the uncomfortable look, so I asked in Spanish if he knew which platform the train to Badajoz uses. In perfect Brooklyn-accented English, he responded, “I have no fucking idea.” After that, he spoke in Spanish and Spanish-accented English. I will never forget my shock / amusement at hearing that perfect Brooklyn accent in the middle of Spain. I wonder where he picked up that particular accent, and why for just that phrase.

A lot of this post has focused on the challenges of traveling in Spain. That’s just because I figure that is the kind of information that will be most helpful to readers. The overall experience of going to Spain was great. I saw some wonderful things and had experiences that will stick with me forever (for more details on some of the highlights, see my posts about Toledo and Mérida.)

The people of Spain were good to me. In general, there was a laid-back quality to them. There were cultural differences depending on what town I was in. I regretted inflicting my poor Spanish on these good people. But that experience gave me a more personal understanding of the challenges facing those who have trouble communicating, be it because of language or disability.

One thought on “A History Fan’s Visit to Spain”